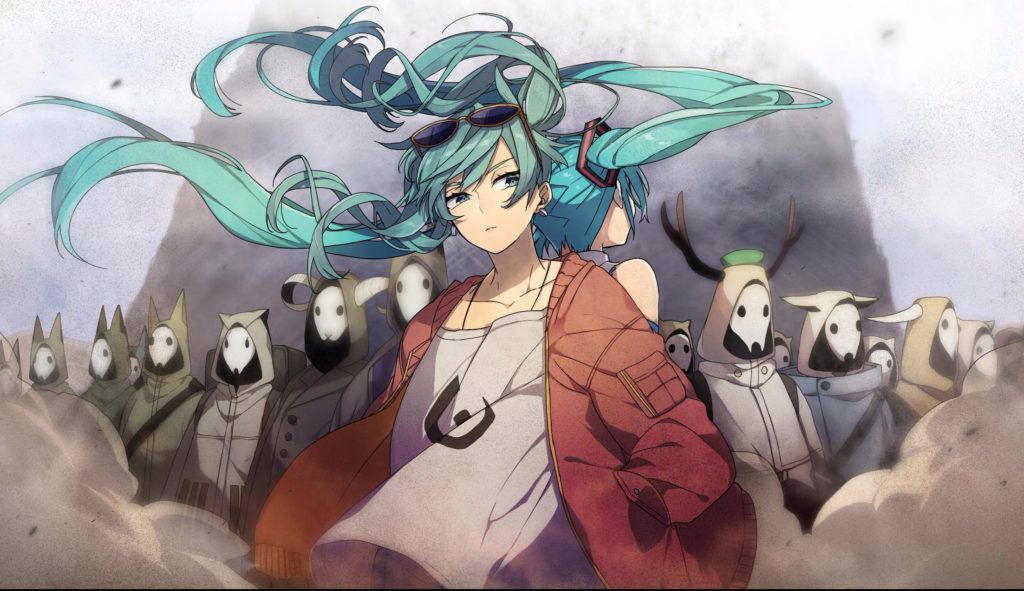 With over 3 million views on YouTube and over 1 million on NND in under a week, it’s likely you’ve heard of Hachi’s new song, “Suna no Wakusei” (砂の惑星), or “Sand Planet.” Created as the theme song for Magical Mirai 2017, Sand Planet is (as far as I can tell) the first Vocaloid song Hachi has released since his Donut Hole single in 2015. If, for some reason, you don’t know who Hachi is, he’s the producer behind some iconic Vocaloid hits such as “Matryoshka,” “Panda Hero,” and “Open and Close, Demons and the Dead.” Familiarize yourself with them if you haven’t.

The song itself is very indicative of Hachi’s style, with the keyboard hook, unusual dual-guitar riffs, scattered vocal samples, and somewhat monotone Vocaloid delivery, especially in the verses. While I wouldn’t rank it as high as my favorites in Hachi’s repertoire, I find myself enjoying the song more as I continue to listen to it.

The video, on the other hand, is not like the usual illustrated, stylized PVs made for Hachi’s popular songs. Instead, we have this fully-animated somewhat-narrative PV:

What immediately struck me about this video is its depiction of Miku: her casual clothes, her strong stride, and her constantly-serious demeanor. I especially like the close-ups that show off the sharp look of her eyes. We’ve all probably seen Miku donning these kinds of characteristics in other songs and artwork, but I think this version is different because the story of the song is meta, meaning that this is not Miku playing a stern role, but rather Miku herself being portrayed as a stern character. Other songs have taken up meta-narratives about Vocaloids, the most famous being cosMo’s “The Disappearance of Hatsune Miku,” which gives Miku a more sorrowful image.

Using the PV and lyrics (VocaDB/Vocaloid Lyrics wiki), we can piece together most of the story this song is telling. It seems that the “sand planet” is a post-apocalyptic setting that is devoid of all life save the few survivors. Miku walks about this wasteland with a small following. She seems to be calling out for survivors (“If you’re still living now, then respond to me…”), but when they decide to leave, she continues on her way. A lot of the video is Miku and her company walking, but where and why are they walking? We don’t get a clear answer, but the chorus lyric, “If something comes to mind, then walk, So you don’t leave behind any regrets,” indicates that there may not be a destination, but there is a purpose: to continue moving forward so that you don’t regret staying idle. The preceding lyric says, “another day the sun goes down, Which means until it’s back to normal, bye-bye-bye,” so it’s possible that they’re waiting on something to change.

None of this means very much unless there’s a context, which can be difficult to determine with the information provided, but I can give my theory. As I mentioned before, the song appears to be meta because of the way other famous Vocaloid songs are referenced in the lyrics. Through the middle of the song, Hachi makes references to some of his other works, like Panda Hero and Matryoshka, as well as famous songs like Melt, World’s End Dancehall, Mosaic Role, Senbonzakura, Children Record, and others. The ones I mention were easier for me to catch, but others had to be pointed out before I understood them (visit the Vocaloid Lyrics wiki link above to see all the references). These songs are all referenced as things of the past, as “Out-of-place artifacts of the Archaeozoic,” and “Astounding, revolutionary, unprecedented memories…” There is mention of “the life that was born of the Melt sensation,” meaning Miku’s rise in popularity following breakout songs like Melt. That life is history in this song; I believe the scenes in the video with Miku in her usual outfit and happy demeanor are flashbacks to that bygone age. The current sand planet can be seen as a kind of post-Vocaloid scenario, where there is currently a lack of the kind of prevalent, inspiring songs of the past that drove Vocaloid forward.

Notably, most of Miku’s followers in the PV have instruments, and some are seen putting up posters. It’s possible that they are meant to be the “surviving” producers who are still making music with Miku after this “Vocaloid apocalypse” scenario, with some of them leaving to take a different path or finding others to go with instead, as we see at the end of the video (I like to think that the flower-faced person is Hanatan taking Kikuo, although he still actively uses Vocaloid). Miku’s repeated calls for a response would express her desire to have producers follow her as she continues moving forward, awaiting the day that things will change for the better again.

It gets a bit fuzzy in this interpretation when you consider just how things are supposed to change. There’s mixed tones in the language used to describe the songs of the past; they are out-of-place artifacts, but also revolutionary memories. The reference to Panda Hero ties it to salvation, but the lyric about the Melt sensation implies that there is a need to move on. While the popular songs of the past make up Vocaloid’s history and brought it to where it is, perhaps there is also the need to continue to grow, and not simply cash in on the same tunes. Miku celebrates her birthday “Around a cake that’s pure sentimentality,” meaning that it is only composed of nostalgia and sadness, not pushing towards anything new and inventive. But this is not to say it’s all pessimistic. The change in Miku’s appearance and attitude shows her need to adapt in order to continue moving on. We also see two figures waving at Miku as she walks towards them at the end, showing that new people will continue to join the ranks, even through the drought.

Maybe this is all meant to be a commentary on the current state of Vocaloid music, or maybe it’s just a character story set after a musical or literal apocalypse. I’m inclined to think the former, but I can’t know for sure. I also don’t really know what the storms and apples are all about, let alone the giant metal birthday cake. Regardless, this is just one interpretation, and I’ve seen other interesting and convincing ones around the community, so share what you think! Am I just making all this up? Did I miss something important? Do you have the real answers? I want to know! As always, thanks for reading!

This video has inspired some nice fanart, like the feature image on this article: Source

This entry was posted in Music Review, Uncategorized, Vocaloid news. Bookmark the permalink.